"Our conclusion with Lancelot is clear: not only has he been running great with it for months, but the Goodsmiths are also holding up really well. Sand, concrete, mud, deep snow - no problem at all! 😎"

Today I would like to give you another experience report. Namely via the Goodsmith adhesive fitting. The test candidate: Our Noriker Lancelot - who else 😉

First, a brief explanation as to why Lancelot needs hoof protection at all. I'm actually a staunch barefoot advocate. But not every horse can walk comfortably barefoot in every situation; the possible causes are numerous and should of course be remedied in order to enable a healthy, happy horse life. But sometimes it just takes a long time for changes to take effect (e.g. feed optimization) and sometimes the cause cannot be eliminated at all. 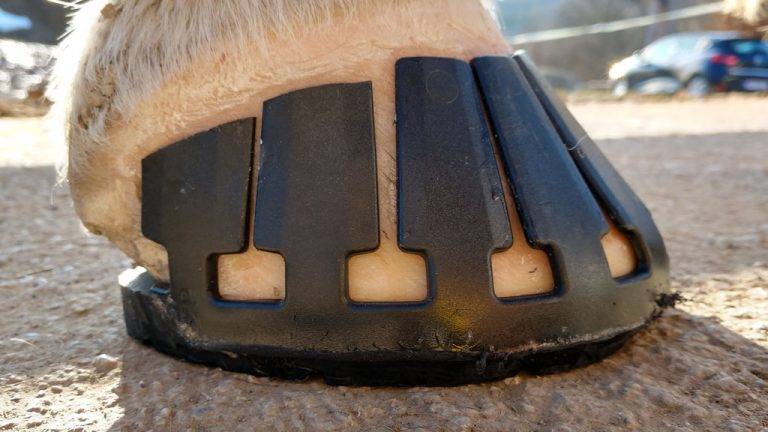 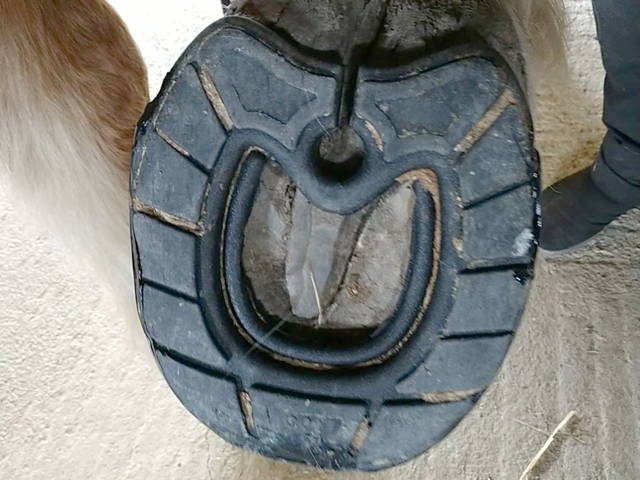 The latter is the case with Lanzelot: he has severe arthrosis in all joints of the lower extremities, i.e. in the coffin joint, crown joint and fetlock joint. The hoof cartilages are also completely ossified. That means: almost all damping structures in the hoof are paralyzed or only partially functional.

Because the result is anyway: because the hoof only has a limited cushioning function and reduced mobility, hoof growth is slowed down on the one hand (due to insufficient blood circulation) and on the other hand the full force of every step is passed through the joints without being cushioned. The result: Lanzelot walks visibly sensitive to painful without hoof protection. And of course we don't want that under any circumstances!

After the attachment, we always have anxious days: will the whole thing hold up? How is he doing with it? You have to know: Lancelot puts his hoof protection to a very special test. We no longer ride him because of osteoarthritis, but he lives in an open stable with a paddock trail on a slope, which means: a lot of movement up and down hills, with a Noriker weight of around 800 kg on top. Not every adhesive fitting can withstand that!

In addition, he only lifts his feet lazily, which manifests itself in two special movement patterns: Firstly, our heavyweight particularly likes to dig his toe into the ground and secondly, he turns when standing. That means when he turns over When running the curve, he does not lift both feet, but stops with the inside leg and rotates it on the ground. Both movements cause quite large forces on the tab collars, which in the past has therefore often been the weak point on the glued fittings. And what does Goodsmith say about that?

Our conclusion with Lancelot is clear: not only has he been doing great with it for months, but the Goodsmiths are also holding up really well. Sand, concrete, mud, deep snow - no problem at all! 😎 The first Goodsmith adhesive shoe was on the hoof for 8 weeks before we then removed it. Only 2 straps came loose during this time, which was not a problem for the durability of the "fitting". However, the interval itself is too long for Lancelot, i.e. we removed it after 6 weeks for the next intervals. There were no signs of fatigue here either.In the mud season, individual tabs came loose, but the adhesive fitting still held up perfectly until I took it off, without me re-gluing the loose tabs. What more could you ask for?!

To the whole article!

The report first appeared on www.mein-leben-ist-ein-ponyhof.at